Summary including videos of the Covert Harassment Conference 2014 >> 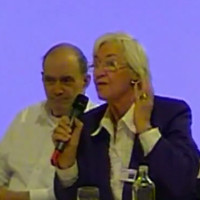 Rauni-Leena Luukanen-Kilde's last words at the CHC 2014:
'We have to help ourselves. Nobody is going to help us. No institute, no government, because we are under the government. And these are government crimes, crimes against humanity. And it is on the very highest level in every single country. You can go up to the prime minister or the president ... and they are behind false flag operations.
So what can we do? First of all it's awareness, awareness, awareness. Talk about it to anybody. And people who are not victims they will not listen, and they don't want to listen because they are afraid. Because if they listen they know they may become victims. So they just deny everything. But we have to. Because one thing that helps us, I think. We know there is no death, we have an energy body. And it does keep us going and if it doesn't keep you going, it keeps me going because you know you cannot die. And that's why I am not afraid.' Video.
Rauni's lecture: Bright light on black shadows, man is a mind, not a body

We are very proud to announce our first conference on covert harassment. The conference is the first of an annual human rights conference with the aim to create awareness on the covert harassment of civilians. Not only whistle blowers, activists and political opponents are targeted, but also thousands of innocent civilians are subjected to non-consensual testing and mind control experimentation by a myriad of non-lethal weapons and covert community harassment by government and non-government agencies. The conference addresses these issues on individual and global scale, and is also about trying to find solutions for all those targeted, which soon will be all children of our world.

News:
24 december 2014: Summary including videos of the Covert Harassment Conference 2014 online
22 November 2014: Thank you so much!
The conference took place, we had some 115 participants (excluding speakers), few journalists and doctors, most were TI's. We had visitors from Russia, Ireland, Norway, Bulgaria, Italy, Malaysia, etc. We will publish details later. We understand that for most TI's it is very difficult to come. For this it is almost impossible to express our gratitude to all who came. We also want to thank our speakers, without them, the conference would not have been possible. And we also want to thank the people who asked questions during the panel discussion, we value your input very much!
The participants list will be send soon, we will put the lectures online in weeks (please be patient) and will contact everyone who sent us messages.
This conference is not over yet!
From our hearts we thank you.
Peter, Melanie, Magnus, Kim, Beata


WHO SHOULD ATTEND
Everyone concerned with the direction our world is going to. Especially politicians, journalists, human rights organizations and activists, lawyers, police and military personnel, doctors and psychiatrists should not miss this conference. And of course we hope to welcome many victims of these crimes joined by friends and/or family members.


AIMS OF THE CONFERENCE
The aims of the Covert Harassment Conference 2014:

More to be added ... All speakers


PROGRAMME
The program is being finalized at the moment. Please see Programme.


ORGANIZATION
The Covert Harassment Conference 2014 is organized by:


TI-EVENT-2014
The conference is part of the TI-EVENT-2014, a single day event to bring together the targeted individuals from all over Europe. It aims at creating more awareness on the covert crimes committed against them and humanity.
Go to the TI-EVENT-2014 website >
Conference speakers

Dr. Rauni Kilde
Former acting director of ENVIRONMENTAL Health and Health education of National Institute of Health of Finland in Helsinki and govt. of Finlands representative in WHO Geneva
More >


Recent visits
Donate
While you are here please consider making a donation for a better world. Thank you. - Donate to STOPEG >
- Donate to EUCACH >
Copyright 2014 covertharassmentconference.com All rights reserved. Terms of use, Privacy statement
0.018,0.009,0.008,0.000